A heel spur is a bony projection or calcification centre on the plantar aspect of the calcaneus. This condition may accompany or result from plantarfasciitis. This associated plantar fascia is a fibrous band of connective tissue on the sole of the foot, extending from the calcaneus to the metatarsal heads.

TPD is often called "adult-acquired flatfoot" because it is the most common type of flatfoot developed during adulthood. Although this condition typically occurs in only one foot, some people may develop it in both feet. TPD is usually progressive, which means it will keep getting worse - especially if it isn't treated early. Aetiological factors may include direct trauma, pathological rupture (RA), idiopathic rupture or functional rupture where the tendon is intact but functioning poorly. 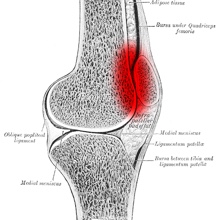 Patellofemoral syndrome (PFS) may be defined as retropatella or peripatellar pain resulting from maltracking or subluxation of the patella in the lateral femoral groove. It should be distinguished from chondromalacia patellae, which is actual softening or degeneration of the underlying patellar cartilage. Patients with PFS usually have anterior knee pain that typically occurs with activity and often worsens when they are descending steps or hills. If left untreated, PFS may lead to cartilage erosion and arthritic degeneration. 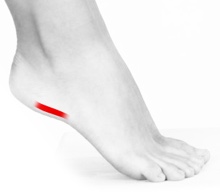 Inflammation of the plantar fascia (the thick band of tissue along the sole of the foot). Plantarfasciitis is characterized by localised or diffuse pain that radiates along the sole of the foot. It may be caused by mechanical stress and is common in athletes or those who are physically active. It usually responds well to treatment with orthoses, rest and anti-inflammatory medication, without the need for surgery. However, it can take a long time to resolve, in some cases as long as 4 years. 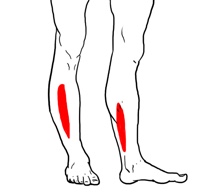 An overuse injury characterised by a dull aching pain brought on by exercise. The pain may be localised or diffuse and is often felt on either the medial or lateral aspect of the tibia. Shin splints are commonly caused by repetitive and / or excessive loading of the muscles and tendons adjacent to the tibia. This often results from overtraining (particularly at the start of a season's training), a sudden change in activity, running on hard surfaces in poor footwear, or poor running technique. 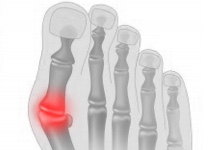 A hallux valgus is a structural deformity of the bones and the joint between the foot and the big toe. A bunion is an enlargement of bone or tissue around the joint at the base of the big toe. (metatarsophalangeal joint). The big toe may turn in toward the second toe (angulation), and the tissues surrounding the joint may be swollen and tender.

A neuroma is a benign tumour of a nerve. Morton's neuroma is not actually a tumour, but a thickening of the tissue that surrounds the digital nerve leading to the toes. A Morton's neuroma occurs as the nerve passes under the ligament connecting the toes bones (metatarsals) in the forefoot. A Morton's neuroma most frequently develops between the third and fourth toes, usually in response to irritation, trauma or excessive pressure.

Realign prefabricated orthotics are made from the highest quality materials that include Polypropylene (PP), Thermoplastic Polyurethane (TPU), Polyurethane (PU) and Ethyl Vinyl Acetates (EVA). All care is taken to ensure desired technical specifications are adhered to, but the products are largely handmade and some variations to sizes and angles may occur. Please be advised that no liability is accepted for inappropriate use and the issuance and advice for patient use is at the discretion of the prescriber. Any modifications that are considered beyond the scope of the product may void any warranty. This will be at the sole discretion of Realign (Aust) Pty Ltd.